Sierra Leone has nixed plans to build a controversial, $318 million-airport outside the capital of Freetown with a Chinese company and funded by Chinese loans.

The mega project, which was due to be completed in 2022, had been commissioned by the previous president Ernest Bai Koroma in March this year.

Its cancellation comes amid cooling enthusiasm in both Pakistan and Malaysia for Chinese loans backing large-scale infrastructure projects in recent months. But Sierra Leone’s decision is the first time an African government has cancelled an already announced, major China-backed deal.

“After serious consideration and diligence, it is the Government’s view that (it) is uneconomical to proceed with the construction of the new airport when the existing one is grossly under utilized,” said a letter from the country’s Minister of Transport and Aviation to the project’s director, published in local media.

Speaking to the BBC on Wednesday, Sierra Leone’s Aviation Minister Kabineh Kallon said the current airport would be renovated instead.

“I do have the right to take the best decision for the country,” he said. It’s unclear if there are any financial penalties associated with cancelling the deal.

Sierra Leone is one of Africa’s poorest nations and is rated by the International Monetary Fund as being at moderate risk of debt distress.

Under former president Koroma, who was in office from September 2007 until April this year, the country took on $224 million of Chinese debt — $161 million of which was racked up in 2016 alone, according to the Johns Hopkins SAIS China-Africa Research Initiative.

President Julius Maada Bio came to power in a hotly contested election several months ago, and has since reassessed some of the financial commitments made by his predecessor.

The Mamamah International Airport deal had been controversial for years, partly due to the “lack of transparency” about its terms, according to Lina Benabdallah, assistant professor of politics and international affairs at Wake Forest University, North Carolina.

The state-backed China Railway Seventh Group — an experienced builder of bridges and highways across Africa — had been contracted to construct the airport, with funding from China Exim Bank.

“These re-negotiations are an important sign of African agency and rethinking the terms of deals signed between Chinese and African leaders,” Benabdallah said.

Sierra Leone will now upgrade its current airport in the town of Lungi, which has been criticized for its poor connectivity to the capital. Lungi is separated from Freetown by an estuary, which means a ferry ride is necessary to reach the city.

The government is reportedly considering building a bridge to link the airport to Freetown. 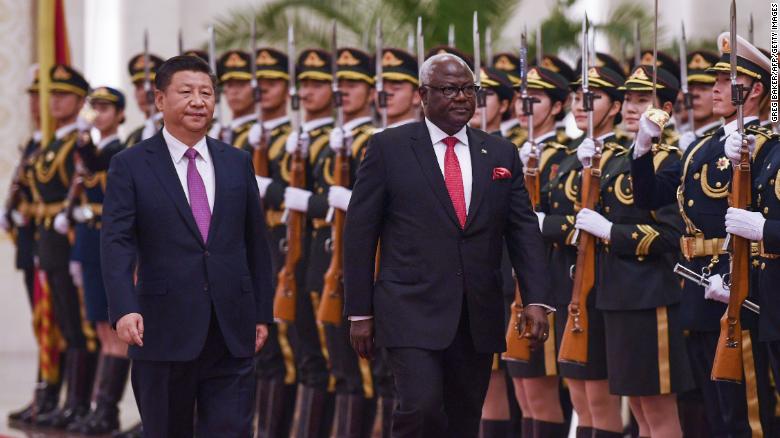 Getting into the red

Collectively, African countries owe China about $130 billion, according to the China-Africa Research Initiative, money which has mainly been used to fund transport, power and mining projects.

At this year’s Forum on China-Africa Cooperation (FOCAC) summit, a triennial meeting between Beijing and African heads of state, Chinese President Xi Jinping announced a further $60 billion in loans and aid for the continent.

In August, 16 United States senators warned their government, in a letter to Treasury Secretary Steven Mnuchin and Secretary of State Mike Pompeo, that “predatory Chinese infrastructure financing” was creating unsustainable levels of debt in the developing world, which the IMF was having to bail out.

Much of the debt was due to extravagant spending in support of Xi’s ambitious Belt and Road infrastructure program, which aims to build huge trade corridors linking China, Europe, Africa and the rest of Asia.

China has been accused of operating a policy of debt-trap diplomacy, which could see Beijing pressure countries that can’t repay loans into exploitative deals. In 2010, Beijing invested $1.5 billion in a Sri Lankan port. When the country couldn’t repay its debt, the facility was signed over to a Chinese-state owned company on a 99-year lease.

But some African leaders have been grateful for the investment the Chinese government has been providing.

“China has become a major investor in our continent. As we look to expand Chinese investment in Africa, we need to encourage more local partnerships between Chinese and African entrepreneurs,” South African President Cyril Ramaphosa said at the opening of FOCAC in September.