By MILLS on October 11, 2018 0 Comments
Umar Mohammed, a footballer who plays for Tudu Mighty Jets

Tudu Mighty Jets is a second tier club in Ghana though it isn’t the most popular club in Ghana; it may not be a club with an avalanche of silverware but when it comes to producing talents who have carved a niche for themselves as far Ghana’s football is concerned, they stand among the giants. The club can boast of producing talents at all levels of the country’s men national teams.

Few clubs have been blessed with the number of exceptional players that have played for the Tudu based club over the last decades. They are very adept at snapping up talented youngsters and developing them into fully fledged stars under their wing. The likes of Prince Tagoe, who made mark with Accra Hearts of Oak as well as clubs in Asia and Europe; Emmanuel Eli Keke, formerly of Dreams FC; Inusah Musah of Hearts of Oak fame, Nuru Sulley, Benjamin Tetteh, Nicholas Mensah, Richard Ofori just to mention but a few are all products of Tudu Mighty Jets.

As the motherlode of talents, hardly a year passes by without a new star emerging from Tudu Mighty Jets. The present generation has loads of these talents but one that has consistently stolen all the attention and plaudits is Umar Mohammed.

At just 16, Mohammed’s consistent performances always creates murmurings among the spectators who are awed by the young lad’s immense talent hence the moniker ‘Yelwa Messi’.

Mohammed was born in Accra and quickly settled at Yelwa, a suburb of Kumasi and started with Lazio Babies, a colts club in the metropolis where he continued his development and joined Ginak FC, a second division team in Kumasi. At Ginak FC, his consistent splendid performances attracted many potential suitors but Tudu Mighty Jets were the luckiest among the lot and quickly swooped in to sign the budding talent.

Mohammed’s burst of pace grips you with excitement, his sublime skills keep you on the edge of your seat. There’s an adrenaline rush anytime he has the ball tightly glued to his magical left foot. He is a player with a special gift and finesse, speed paired with technique and skills- at just 16. There’s always an instant sense of bums-off-seats excitements when Mohammed picks up the ball. Nobody is necessarily sure what’s going to happen, but the sense of anticipation is always high. 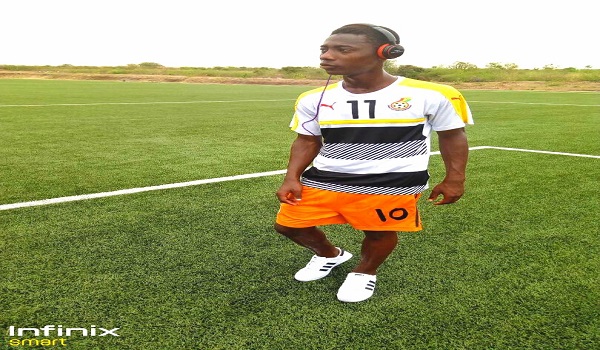 With such displays, one can easily tell that the lad is destined for greatness. Such displays has always characterised the youngster’s play and that earned a place in the 2018 Black Starlets team but unfortunately missed out on the African qualifiers in Niger due to ill health.

Mohammed sighs anytime he remembers about this sad happening. The sigh is deep and engrossing; it embodies a sort of disappointment that can’t be forgotten: a seemingly eternal feeling of sadness and despair.”I become sad anytime I ‘m reminded of that unfortunate occurrence.” I was in very good shape and thought the moment to showcase my talent to the footballing world was near but that wasn’t to be. The Almighty ALLAH had different plans and HE knows best” He gushed.

“I am not surprised to hear people talk about my talent anytime they see me play.”

“I chose to be footballer and can only succeed if I work hard. Its good see people liken my style to Messi. It’s refreshing but I won’t get carried away with that. I really like Messi and do watch his footages on YouTube always. He is my idol but I must create my own path and world. It won’t be easy but Insha Allah, I will make it.” He enthused

He plays a play-making role and occasionally a free-attacking role. He is comfortable attacking on either wing or through the centre of the pitch. His quick feet allow him to keep control of the ball when dribbling at top speed.

“I am able to play on either side of the wing but I am very comfortable when I am assigned to a free-attacking role. When I am allowed to dictate the pace of the game. It brings out the best in me.”

As a student of Sakafiya Senior High School, Umar Mohammed was very instrumental in last December’s Inter Schools and Colleges football competition where he led his school to a third place finish and was also at hand as he led the school to a TOP 8 triumph in March this year.

For the time being, his development is being managed with kid gloves, but Ghana’s football landscape is fettered with vultures keen to make a quick buck from the country’s emerging talent. If the 16 –year –old continues to build on his performances and progress as a player, there is no doubt the big boys will be knocking on his club’s door soon. The list of individual strengths is a long one, and it’s a bit scary when you realise how fast he’s improving as a player.