Those were the words of Assistant Commissioner of Police (ACP) Dr Benjamin Agordzo, who has been accused of offering assistance to alleged coup plotters.

Adorned in his official police uniform and a United Nations beret and full ensign, a visibly upset Dr Agordzo, who was being escorted out of the courtroom, stopped to speak to journalists who had thronged the Kaneshie District Court premises to observe proceedings.

The atmosphere was tense. Family members and sympathisers enveloped him as he spoke to the media for a few seconds and walked calmly into a waiting vehicle in the company of security operatives.

He thanked the media for their support and described the accusation as “frivolous”.

“I am as strong as anything. I am not going to be bogged down. Nobody can gag me. I have not committed any crime. I have done nothing wrong. I will stand for this till the end. They cannot break me down at all,” he said before walking into the waiting pickup truck.

Dr Agordzo told a police officer off when the officer suggested to him that he was not supposed to be in uniform because he had been criminally charged.

Meanwhile, Superintendent of Police, Mr Peter Lanchene Toobu (retd), who was speculated to be arraigned on a similar offence of an alleged involvement in a coup plot was absent in court.

Mr Toobu has denied any connection with coup plotters and questioning by the security apparatus.

However, in the Kaneshie District Courtroom, Dr Agordzo, on two occasions, shook his head and gave a sneering smile when the prosecutor assigned to the case opposed an application, which challenged the jurisdiction of the district court.

Before the hearing, the defence team, led by Mr Hamdiya Mohammed, raised a preliminary objection regarding the jurisdiction of the court and other matters.

Counsel said his team had not been served with the bill of indictment and that was particularly a key issue because the case involved a first degree felony under section 182 of the Criminal Offences Act, 1960 (Act 29).

He also raised the issue about the court only having jurisdiction to hear committal proceedings in matters involving third degree felonies as stated in section 181 of Act 30 and Article 14 (3) of the 1992 Constitution.

“The court does not have the jurisdiction to entertain this matter. The court as stated in Article 14 (3) of the 1992 Constitution refers to the court which can entertain the matter and assess whether or not to grant bail or remand the suspect,” counsel argued.

Mr Mohammed emphasised that the court neither had jurisdiction to grant bail nor remand the suspect to the extent that it was not shrouded with jurisdiction to hear the matter. 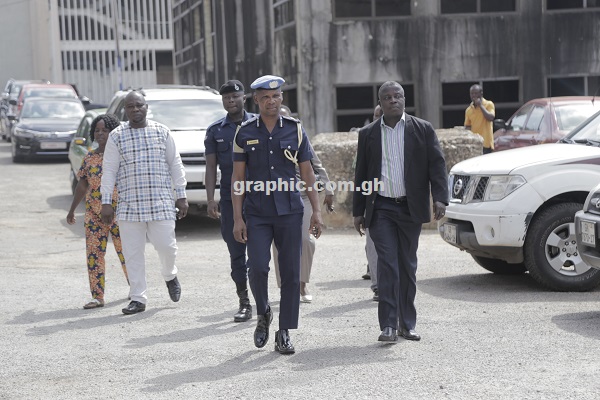 He accused the prosecution of intentionally arraigning the suspect when it knew very well the court had no jurisdiction to grant bail.

“This is an attempt by the prosecution to delay bail for the suspect. Just because this has been done in the past does not mean that it is the right procedure to follow. We, therefore, implore the court to rise to the occasion and decline jurisdiction,” counsel prayed.

Mr Mohammed further argued that in the unlikely event that the court was minded to decline jurisdiction, “we humbly pray that you set down the matter for constitutional interpretation.”

The questions to be set down for the constitutional interpretation, he noted, were that the practice of bringing the suspect to the district court to be remanded contrary to Article 14 (3) of the 1992 Constitution, when prosecution was not ready for communal proceedings and on a true and proper interpretation of section 18 (1) of Act 30 vis-à-vis Article 14 (3) of the 1992 Constitution, the court had no jurisdiction to deal with bail or remand for first degree felony.

An Assistant State Attorney, Mr Sylvester Asare, objected to the defence team’s submissions and said the prosecution was abiding by the 48-hour rule in order not to keep the accused persons in custody beyond 48 hours.

He said nowhere had Article 14 (3) of the 1992 Constitution indicated that the court did not have jurisdiction to hear the matter.

Mr Asare further argued that section 18 (1) of Act 30 also did not suggest same that the court did not have the jurisdiction to entertain the matter.

“We are saying that we are before you according to the 1992 Constitution, which says we are to appear before you within 48 hours of arrest or detention. For that matter, we are here to demand that this court remands the accused person,” Mr Asare said.

He stressed that the district court was the court of first instance of issues or matters concerning indictable offences for trial and under the circumstances, investigation was ongoing and far advanced.

Mr Asare submitted that the issue of jurisdiction raised by the defence team should not be entertained because all the authorities the team relied on either did not expressly or by implication, oust the court’s jurisdiction.

“In view of this, we object the invitation by defence for this court to decline jurisdiction.

“The issue concerning bail is a premature matter before you. Defence is very much aware as to how to apply for bail in matters like this and if the defence cares to apply for bail, the appropriate forum is the High Court,” Mr Asare said, adding that the call for bail was premature and an attempt to merely frustrate justice.

Taking cognisance of the high-ranking position of the accused person in the police service, the prosecutor said the state had no intention of keeping the accused person to abuse his rights and that was the main reason he had been arraigned within the 48-hour rule.

Mr Mohammed rebutted the prosecution’s arguments and reminded the court that ACP Dr Agordzo had not been charged with any offence.

He said his client had only been cautioned and that his legal team had not received the bill of indictment.

“We are not here for committal proceedings and my client is not yet an accused person,” the defence counsel said.

But Mr Asare denied the claims and said the accused person had been charged, served with the facts and was, therefore, properly before the court.

The court, presided over by Mrs Eleanor Kakra Barnes-Botchway, announced that the court would give its ruling on Friday, November 8, 2019.

She accordingly remanded the accused person.

Dr Agordzo is a serving police officer and former Director of the Transformation Office of the Ghana Police Service.

He was invited by the Bureau of National Investigations (BNI) last Monday afternoon and had been detained since.

He is alleged to have connections with an alleged plot to destabilise the country and for which some people are currently in court with charges of treason.

Dr Agordzo is alleged to have offered some assistance to the leader of the alleged coup plotters, Dr Frederick Yao Mac-Palm, and some eight other suspects, including a military officer and seven soldiers, who have also been charged with treason.

‘I’ve not been invited’

Meanwhile Superintendent of Police, Mr Peter Lanchene Toobu (retd), has said: “I have never been invited by the police or the Bureau of National Investigations (BNI) to assist in any investigations.”

Reacting to media reports that he was in the custody of the BNI in connection with a plot to destabilise the country, the former Executive Secretary to the immediate past Inspector-General of Police (IGP) expressed shock at the reports and the purpose it intended to serve, reports Albert K. Salia.

He said he neither knew anything about the issue nor had any link whatsoever with the alleged plot.

News have been rife in the mainstream and social media about the BNI holding Mr Toobu in custody in connection with an alleged coup plot. It was reported that he was to appear in court today to face charges in connection with the alleged plot.

“As I speak with you, I am in the constituency working on how to improve the lot of my constituents,” he stated.

Mr Toobu wondered why he would resign after 25 years of unblemished service to the country to contest the primaries to go to parliament if he did not believe in the democratic system.

He said having served in the position of Executive Secretary under a number of IGPs, including Mr Paul Tawiah Quaye, Mr Mohammed Alhassan and Mr David Asante-Apeatu, he was in the position to know security matters better instead of getting involved in such pettiness.

“I believe my professionalism and competence made all the IGPs under whom I served keep me. I cannot and will never divulge any confidential information no matter the circumstances to anyone,” he stated.

Mr Toobu resigned in July this year to contest the Wa West Constituency seat on the ticket of the opposition National democratic Congress (NDC).

Ten individuals including a medical practitioner, Dr Frederick Yao Mac-Palm, and five soldiers, have been charged with treason on allegations of plotting to destabilise the country and possibly take over the government.

The others are Donyo Kafui, alias Ezor, a blacksmith; Bright Alan Debrah, a fleet manager, and Gershon Akpah, a weapons mechanic at the Ghana Armed Forces (GAF).

Two other soldiers L/Cpl Albert Baba Ibrahim and L/Cpl Godwin Nii Ankrah, who were previously arraigned as being part of the plot, have, however, been discharged.