President Akufo-Addo has in accordance with section 10 of the Citizenship Act (2000) Act 591, approved the applications of some one hundred and twenty six (126) members of the African-American Diaspora Community, to become Ghanaian Citizens by registration.

According to Section 10 of the Citizenship Act (2000) Act 591 which is entitled, “Citizenship by Registration”, sub section one (1) says “a citizen of age and capacity of any approved country may upon an application, and with the approval of the President, be registered as a citizen of Ghana if he satisfies the Minister that, (a) he is of good character; (b) he is ordinarily resident in Ghana; (c) he has been so resident throughout the period of five years or such shorter period as the Minister may in the special circumstances of any particular case accept, immediately before the application; and (d) he can speak and understand an indigenous language of Ghana”.

The Ministry of the Interior based on the aforementioned Statute after much scrutiny, recommended to President Akufo Addo, for approval, the citizenship applications of the 126 members of the African American and Caribbean Diaspora community in Ghana.

As a prelude to the formal conferment of Ghanaian Citizenship on the applicants, Her Honour, Priscilla Dapaa Mireku, a Circuit Court Judge of the Republic, administered the Oaths of Allegiance to them.

President Akufo-Addo in his address at the banquet hall of the Jubilee House, indicated that the ceremony is part of activities “commemorating the year of return, the 400th anniversary of the arrival of the first enslaved Africans in the Commonwealth of Virginia which was later to become part of the United States of America”.

“Your decision to take up Ghanaian citizenship means you have agreed to respect and abide by the laws of Ghana and live in accordance with the tenets of Ghana’s constitution. You have the responsibility of preserving and promoting the image of a country who’s reputation amongst the comity of nations is today high” President Akufo-Addo noted. 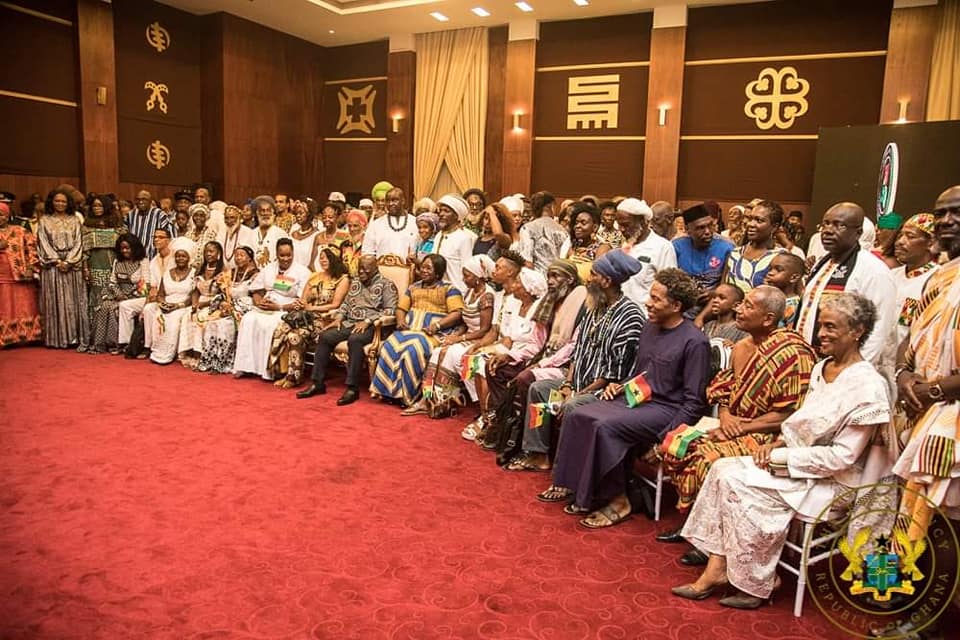 “In all your actions, I urge you to guard jealously our country’s image. It is a charge I am confident you will uphold” the President added.

Futher in his statement, President Akufo-Addo, admonished the new Ghanaian citizens to make it a point to learn an indeginous Ghanaian language in order to speed up their process of reintegration.

“I suggest that to facilitate the process of reintegration, you learn at least one Ghanaian language of your choice, Akan, Ewe, Dagbani, Hausa or Nzema, amongst others” President Akufo-Addo stated.

President Akufo-Addo paid glowing tribute to the late Jake Otanka Obetsebi Lamptey, crediting him with the initiative that championed the cause for the descendants of the slave trade to return to their homes of origin when he served as Minister for Tourism in the President John Kufour Administration.

“He instituted the” Joseph Project” whose aim was to reconcile and unite the African peoples on the continent and in the Diaspora and to release their energies to help build Africa and the Caribbean. This ceremony will be a happy moment for him” the President said as he eulogized the late Obetsebi Lamptey.

The Minister for the Interior, Ambrose Dery, in a brief statement reminded the applicants of their obligations under the laws of Ghana as they take up Ghanaian citizenship.

“Following this event, you will hold Ghanaian passports. I would however advise our brothers and sisters to abide by the laws of Ghana and defend the country at all times. Your failure to abide by the law goes with sanctions” the Interior Minister said.

*Response of the Diaspora Coalition*

Rabbi Kohain, in a response on behalf of the Diaspora Coalition said the entire group that has received Ghanaian Citizenship is overwhelmed by the honour done them. He pledged on behalf of his colleagues that they will do everything within their power to contribute positively to the development of Ghana which has become their new home.

The event was organized by the Diaspora Affairs of the Office of the President in conjunction with the Ministry of the Interior, Ministry of Foreign Affairs and Regional Integration and the Year of Return Secretariat.