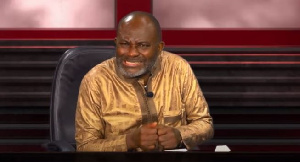 MP for Assin Central, Kennedy Agyapong, has exposed a lady who is alleged to be often used by pastors to stage all manner of fake miracles and healings.

According to Kennedy Agyapong, the woman mobilizes and provides these pastors with individuals and charges GH¢150 per head for each session with a pastor.

“This woman mobilizes other people and gives them out to pastors to be used to fake miracles and healings. This lady I’m about to show is being used by most pastors to fake miracles and healings. They use people as young as twelve years. The woman charges GH¢150 for per session with a pastor. Why would you allow yourself to be used for just 150 cedis?” Mr. Agyapong stated on NET2 TV.

He also alleged that these people are often bused, coached by the pastors to fake prophecies.

“I’ve told you that these pastors usually hire people to fake miracles. They put a lot of them in buses to their churches, coach them and pay them just to fake miracles,” he stated.

The woman on the other hand says most of these pastors do not only use the women to fake miracles but end up sleeping with them.

“These pastors like women a lot. They like women. I don’t know whether it will take them to heaven or what,” she stated.

In a video recording shown live in NET2TV, she revealed that most pastors who fail to pay for her services end up being exposed.

The Member of Parliament for Assin Central, Kennedy Agyapong identified Bishop Daniel Obinim and some other pastors as charlatans parading as servants of God in the country.

He has among several allegations accused the pastor of sleeping with countless women including married ones and using some for ritual sacrifices.

Watch the video below