Obinim will face EOCO after this – Kennedy Agyapong 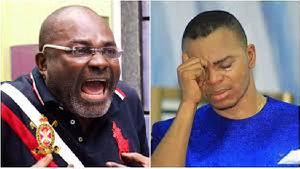 Politician Kennedy Agyapong has revealed that he caused the arrest of controversial preacher Bishop Daniel Obinim.

The Head Pastor of International God’s Way Church was arrested on Tuesday, May 19, for publication of false news and also charged for forgery of a document contrary to sections 208 and 159 of the Criminal and other offences Act, 1960 (Act 29) respectively.

Reacting to the arrest, the Assin Central MP who has been using his TV channel, Net2 TV, to ‘expose’ Obinim claimed he caused his arrest and would face the Economic and Organised Crime (EOCO) when the first case is over.

According to Kennedy, Obinim is still in police custody for failing to pay a GHC100,000 bail plus three sureties.

He added that he will expose other fake pastors using his TV channel.

Watch the full interview of Kennedy Agyapong below.